Do you need a home inspection in Portland? Call us today or schedule online! 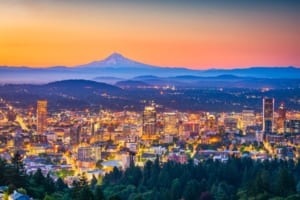 Known for its laid-back locals, artistic freedom, and Voodoo Doughnuts, Portland sure lives up to its unofficial motto: “Keep Portland Weird.” Friendly locals and an emphasis on self-expression has made Portland an attractive place to live for many.

With a city population of nearly 650,000, can you believe Portland is home to the smallest park in the world? Mills End Park, located near downtown and resembles a big potted plant rather than a park to play in. In the Pearl district, you’ll find the world largest independently owned bookstore, Powell’s City of Books, with chains throughout the city. The Bookstore retailer carries over 4-million new and used books. Finally, Portland has more micro-breweries per capita, than any other city in the world.

Setting up your services in Portland, we hope this makes it easier.

There are nearly 100-schools in the Portland area serving thousands of kids in elementary, middle and high schools. There are also twelve school districts, many rating above average according to residents there.

Crimes rates in Portland have seen a rise, and the city currently has a safety index of (2). That being with 100 as the safest. The city has some work to do to ensure residents feel secure and confident living, working and raising a family there.

If you are thinking about buying a home in Portland, the market is primed for buyers. After years of seeing a record-breaking housing market, it has finally cooled a bit allowing new buyers a chance to come in and make purchases. The median home price is $386,000 according to data collected from December of 2018 to March of 2019. This is a 3% drop from the same period last year. Residents are currently paying over $3000 annually in property taxes.